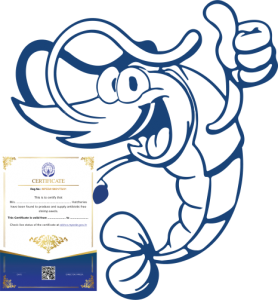 he second largest fish producer in the world with a total production of 13.7 million metric tonnes in 2018-19 providing meaningful employment to 14 million people across the value chain in harvesting, processing packaging, and distribution. During 2019-20, India exported 12.89 lakh MT of seafood worth US$6.68 Billion. The commodity basket of Indian fishery export is highly diversified and bulk of the exports is traded in the frozen form.

Over the past few years, frequent recalls of import rejections by importing countries have increased consumer awareness on health hazards antibiotics residue and pharmacologically active substances present in the seafood, resulted in great deal of public concern particularly in the developed countries where food safety concerns are dealt at the Governmental level.

Regulations on Antibiotic use in Aquaculture: Ministry of Commerce and Industry (MOCI), Government of India has notified MRLs of antibiotics and heavy metals in the marine products exported (Notification SO 792 (E) dated Aug 17, 2001). As per the MOCI notification five antibiotics viz chloramphenicol, furazolidone, neomycin, nalidixic acid and sulphamethaxazole are banned and no residues should be left in the animal body.

There are nine substances included of Regulation 2377/90/EEC that may not be used in food producing species because no safe level of residue can be determined: chloramphenicol, chloroform, chlorpromazine, colchicine, dapsone, dimetridazole, metronidazole, nitrofurans (including furazolidone) and ronidazole. The presence of such substance residues (including metabolites) is prima facie evidence of the use of prohibited substances in a food animal species.

Importance of Certification: Certification of hatcheries for production of antibiotic free seed has emerged as one of the main interventions to free Indian aquaculture from the use of antibiotics. This is also seen as a tool to improve consumer confidence.

Quality Certifications issued by international bodies are expensive and beyond the reach of small and marginal producers. In this circumstance, MPEDA formulated a scheme for Certification of Hatcheries for production of antibiotic free seeds in consultation with Farmer representatives, Hatchery representatives, Fisheries research institutions, EIA and CAA.

Apart from National Residue Control Programme (NRCP) and Pre Harvest Test (PHT) initiatives implemented by MPEDA, development of Certification in Aquaculture which is named as ‘SHAPHARI’ meaning superior quality of fishery product suitable for human consumption is another milestone initiative to address the above issue on food security.

Stake holder meetings were conducted in association with Society of Aquaculture Professionals (SAP) in shrimp farming areas in Tamilnadu and Andhra Pradesh during 2018-19 to find a lasting solution to issues related to food security aspects in aquaculture production.  One of the decisions of the stakeholder consultations was to start a certification scheme for export oriented aquaculture production systems that include both hatcheries and farms.  Farmers were also concerned on the quality of seeds supplied by the hatcheries.

The study clearly demonstrated that the seed production with bacteriophage and probiotic protocol is possible and the survival rate can be increased substantially by standardizing the application rates and by gaining more experience in the antibiotic free operations.

In order to improve the consistency, credibility and transparency of the Certification process, a webportal has been designed with an intention to streamline the auditing process. The online process pass through a series of steps before issuing the certificate. Processors & exporters who are desirous of buying quality shrimp for their farms can verify the claim of the farmer by visiting the SHAPHARI web portal.  SHAPHARI webportal may be linked to E SANTA web site of NaCSA for realizing maximum value for their farm produce.

Home page of the Shaphari WEB PORTAL for Certification of Aquaculture

Certification of Hatcheries for the production antibiotic free seeds: Based on the stakeholder meeting interactions, MPEDA decided to initiate certification of export oriented aquaculture production systems in India as a voluntary scheme.  To this end, MPEDA constituted a committee comprising two representatives of All India Shrimp Hatcheries Association (AISHA), representatives of Prawn Farmers Federation of India (PFFI) and officials of MPEDA for formulating the scheme for certification of hatcheries for production of antibiotic free seeds.  Draft guideline for certification prepared after a series of consultations were placed before various national and international institutions related to fisheries and Aquaculture for their comments and suggestions.  Comments and suggestions were critically analysed by the committee and necessary amendments were made in the scheme and prepared the final document.  The scheme is under pilot phase of its implementation with the participation of 13 hatcheries.

Pilot phase of ‘SHAPHARI’ Certification of Hatcheries: ‘SHAPHARI’ is a Sanskrit word meaning ‘Superior quality fish suitable for consumption for even an Ascetic”. Shaphari is a process certification applicable to an Aqua FARM that conforms to the basic guidelines for Good Aquaculture Practices (GAP) and meeting the standards of SHAPHARI. 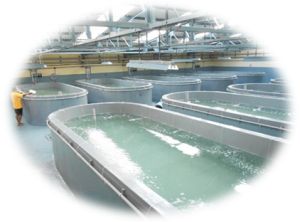 MPEDA’s Pilot phase of hatchery certification scheme was initiated with the participation of 13 willing shrimp hatcheries engaged in seed production since May 2020. These hatcheries were willing to undergo audit by the designated auditors and agreed to be part of the surveillance program for shrimp seed quality.  The list of hatcheries participating in SHAPHARI Certification of Hatcheries and the present status of Certification is as follows:

It is anticipated that by March 2021, the above hatcheries shall complete the essential audits viz. Preliminary audit, Committee audit and Surveillance audits (4 numbers) and will be eligible/non eligible for Certification based on the audit outcome.  By April 2021, MPEDA will be ready for launching the scheme for other shrimp hatcheries in the country.

‘SHAPHARI’-Certification of Farms for the production residue free shrimp:

There are more than 1.5 lakh Ha of water spread area under shrimp aquaculture in India.  Shrimp farming is done in India in varied conditions and environment.  Hence, it is advisable to test the Certification scheme in a pilot scale before launching the scheme for all the farms.  In this connection, a Pilot scale Certification of Farm is proposed to test the protocols, procedures and the webportal in the Farm Certification.

Standards for Certification of Farms:

The standards for certification of farms for production of antibiotic free shrimp are developed through a process of consultations with the experts in the field of hatchery operation, government agencies involved in R&D, Regulatory agencies, and developmental bodies and general public. The standards proposed will be improved on a continuous basis in keeping with the modification in the scope of the scheme, improvements in the technology and scientific knowledge to ensure high quality, disease free and residue free shrimp production.

The guideline developed for SHAPHARI-Certification of Farms is under internal review at MPEDA and will soon be circulated among the stakeholders for their comments.  The pilot of the scheme is proposed to be launched by March-April 2021.

In a world in which the demand for fishery products are increasing certification appears to be a possible way to bring about a greater degree of control and sanity in the system and supply of safe seafood with better quality. The role of certification programs will not only provide consumers with a safe product but it will also ensure better returns to farmers, reduction in rejections of export consignments and will lead to increased export earnings.